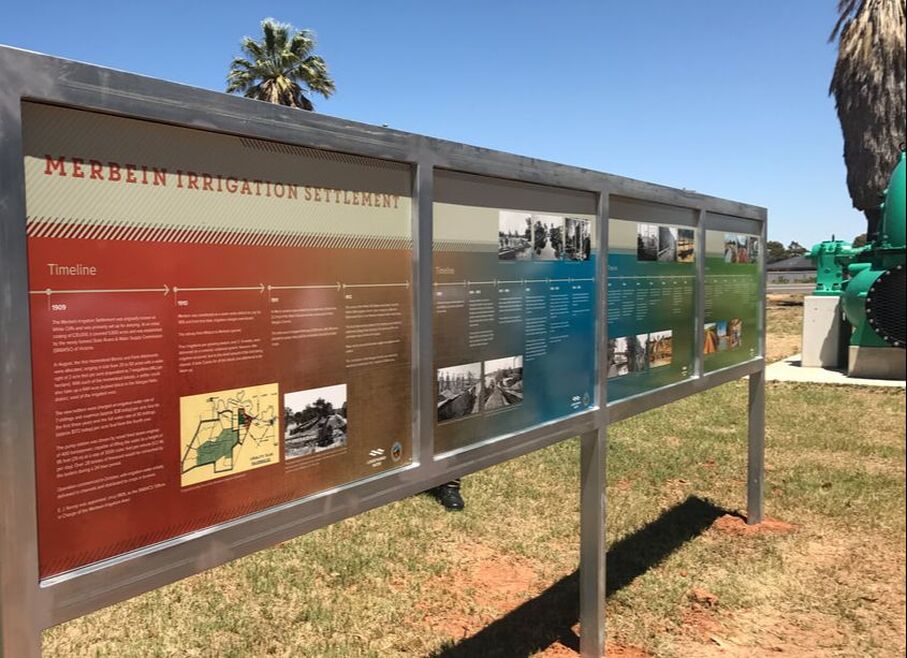 ORIGINS OF THE MERBEIN IRRIGATION SETTLEMENT

On October 21st 1909, to mark the beginning of the settlement, two date palms were planted at the entrance to the Experimental Blocks 66 and 67 on Channel Road, by Victoria’s Governor, Sir Thomas Carmichael.

The Merbein irrigation blocks, initially ranging in size from 50 to 60 acres, were originally allocated for Dairying. Homestead (irrigation) Blocks could be linked to a dry land block (Farm allotment 640 acres) in the Wargan/Yelta district, west of the settlement.

By 1912, the hot climate, poor choice of dairy stock and the distance from markets saw the Merbein settlement change from dairying to the less perishable crops of itrus and dried grapes. It was also in this year that E. J. Kenny, the first 'Officer in Charge of the Merbein Irrigation Area'  had the name ‘White Cliffs’ name changed to Merbein Waterworks District and Merbein Irrigation Area. Merbein was reputed an aboriginal name of a local sand hill, although Merebin, was the preferred spelling by many settlers.  It was also claimed to be an aboriginal word meaning ‘throwing a stick by hand’.

The Merbein settlement expanded and prospered.  Towards the end of the First World War, the government chose Merbein as a suitable place to repatriate injured or incapacitated soldiers. The soldier settlements of Birdwoodton No. 1 (1917), West Merbein (1918) and Birdwoodton No. 2 (1919) were established in this era.
​
TODAY
Today, Merbein remains true to its historical roots.  It continues to be a successful irrigation district, diversifying from the growing of dried grapes and citrus to a wide variety of wine and table grapes, asparagus, almonds, mushrooms and vegetables with a wine bottling and packaging industry on the original Mildara site.  A large regional intermodal transport hub, road and rail, for the export of district products is also located at Merbein.