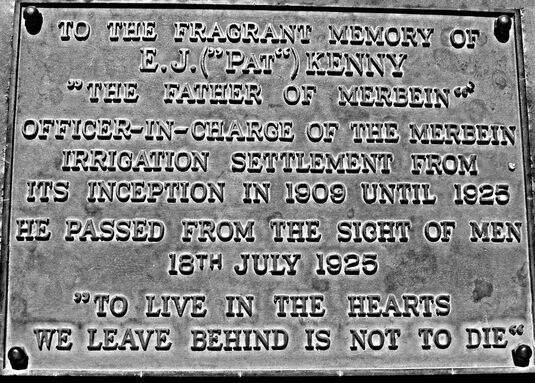 ​Kenny was appointed by the State Rivers & Water Suppy Commission of Victoria in 1909 to use his engineering skills to supervise the forming of the irrigation channels and the erection of the first section of the pumping plant.

When he first arrived, he pitched his tent adjacent to the white Murray River Cliffs and as the 'First Officer in Charge of the Merbein Irrigation Area’, he worked tirelessly to develop Merbein into one of the finest examples of closer settlement under irrigation conditions in the State.

In 1912, Kenny had the original name of the settlement  'White Cliffs' changed to ‘Merbein Waterworks District’ and ‘Merbein Irrigation Area’.

​Even before his untimely death in 1925, Kenny was known as the
​'Father of Merbein'.